A new conservation reserve in the Strzelecki Ranges.

A new conservation reserve, the Brataualung Forest Park, was launched on 14 July 2018.

The new 2,390 hectare park protects important areas of cool temperate rainforest and damp forest. It provides habitat for significant species including Slender Tree-fern, Koala, Powerful Owl and Strzelecki Burrowing Crayfish. The community has been advocating for the improved protection of forests in the Strzelecki Ranges since the mid 1990s.

The declaration of the new reserve is a key early step towards securing a new 8,000 hectare conservation reserve that will result from a 2008 agreement between the Victorian Government and Hancock Victorian Plantations (now known as HVP Plantations). 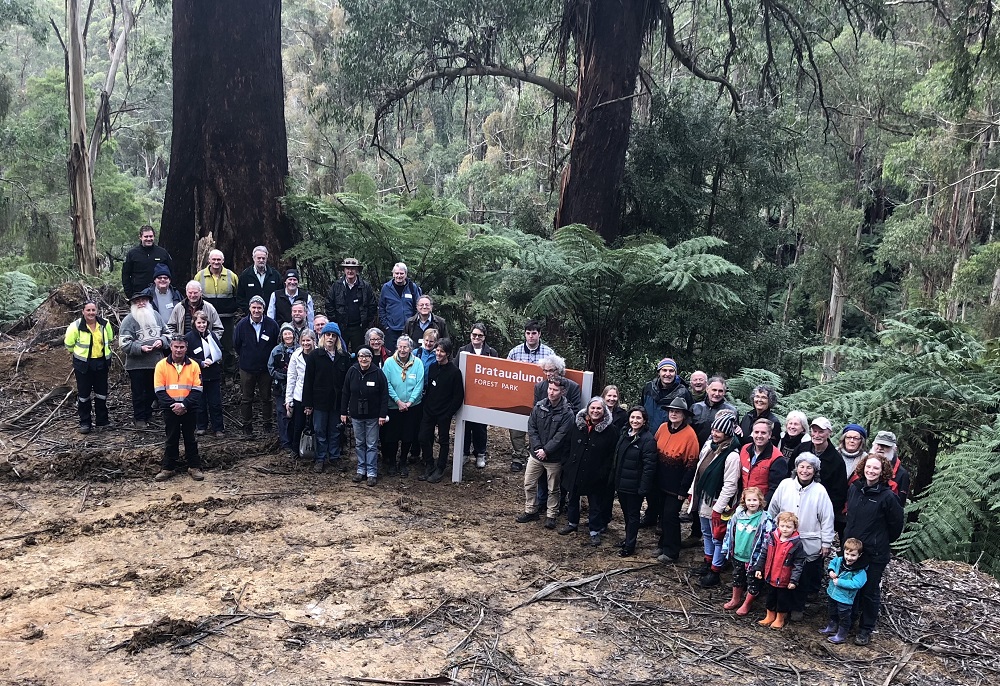 The name for the park

The name of the park was determined by a community engagement process conducted in 2017 and 2018. At the launch on 14 July 2018, Dr. Aunty Doris Paton announced the name of the new reserve - Brataualung Forest Park. Dr. Aunty Doris Paton is a Gunaikurnai Land and Water Aboriginal Corporation board member. The name recognises that the reserve area is part of Brataualung Country of the Gunaikurnai people.

The country of the Gunaikurnai people includes the coastal and inland areas to the southern slopes of the Victorian Alps. The Gunaikurnai people are the traditional owners of the land on which the Brataualong Forest Park is being created. The Gunaikurnai Land and Waters Aboriginal Corporation have been consulted and support the use of the name. GLaWAC represents the Traditional Owners from the Brataualung, Brayakaulung, Brabralung, Krauatungalung and Tatungalung family clans who were recognised in the Native Title Consent Determination made under the Traditional Owner Settlement Act 2010.

The new park is part of an area known locally as the 'Cores and Links'. The ‘Cores and Links’ concept was developed subsequent to the sale of Victoria’s plantation estate to HVP Plantations in 1998. As a result of lobbying by local community groups, the Strzelecki Working Group was established to investigate values and recommend potential options for future management.

The working group published the report ‘Strzelecki Ranges Biodiversity Study’ in 2001 that proposed a new conservation reserve similar in size and location that is reflected in the 2008 Agreement.

The ‘Cores and Links’ comprise ‘core’ endangered cool temperate rainforest with significant stands of Mountain Ash and damp forest. They also ‘link’ Gunyah Rainforest Reserve to Tarra-Bulga National Park which protects important habitat and permits the movement of plants and animals through the Strzelecki Ranges. 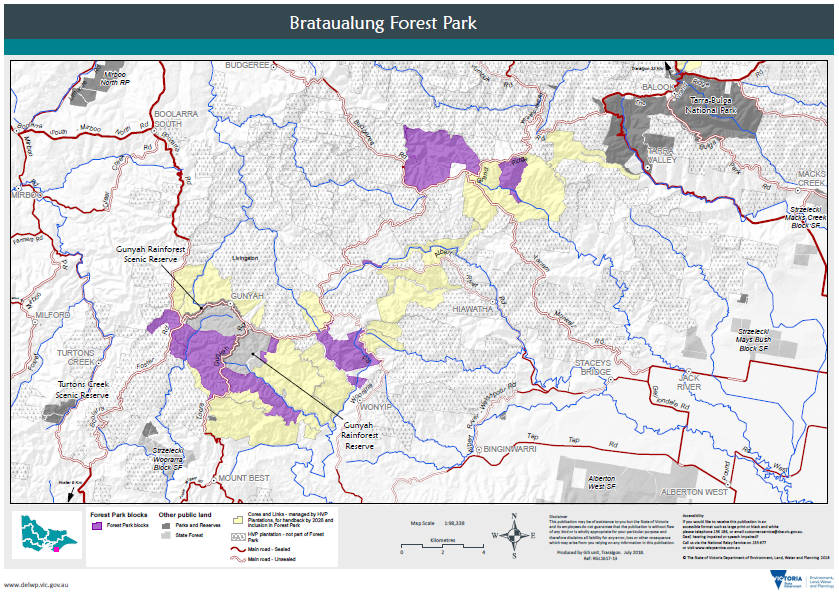 The Strzelecki Reserve (Cores and Links) Agreement was signed in 2008 by the Victorian Government and HVP Plantations. The agreement will return the 8,000 hectare Cores and Links area to public management and, ultimately, protection as part of the reserve system.

The agreement would not have been achieved without the drive and commitment of many members of the community in working together and raising the issue over the last twenty years.

Since 2008, HVP Plantations have been undertaking an annual program to regenerate the areas that have been harvested with native understorey and overstorey.

The first handback of 1,200 hectares of land for the new conservation reserve was completed in mid 2017. This handback was more than ten years ahead of the scheduled end of lease in 2028. The first handback area forms part of the land that has been declared the Brataualung Forest Park.

Over the next ten years, we will continue to work closely with HVP Plantations to return additional areas to public management prior to the end of HVP Plantations’ lease of the remaining areas of the ‘Cores and Links’ in 2028. The Victorian Environment Assessment Council will be requested to undertake an investigation prior to 2028 to provide recommendations on the permanent protection for the land.